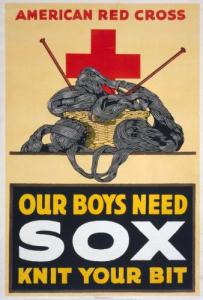 I love history.  That’s not a new revelation for anyone who knows me even remotely well. The past few years I’ve been fascinated with the role knitting had in the war effort. Specifically, how knitting was used to build solidarity in times of war.  Women and children (and men!) were asked to pick up their needles for “the cause”.  Asked to make socks, hats, gloves, scarves and anything else that could ease the discomfort of a soldier at war.  Propaganda posters were everywhere and they weren’t afraid to shame you into it.  Pattern books were distributed, knitting circles were everywhere and men were encouraged to pick up needles and help out while convalescing.  We all know the saying, “idle hands do the Devil’s work” and it was made very clear if you weren’t knitting, you weren’t helping.  It was so important that women, children and men posed for portraits holding their knitting.  Perhaps to prove they were knitting their bit.  No one would accuse them of slacking off; it was captured for all the world to see.

But I also love to knit.  To be specific, I love to knit for other people.  Hats, scarves, sweaters, gloves, I enjoy the process of taking a beautiful skein of yarn and turning it into something. I love the heritage entwined in the stitches.  I love that I was given a talent that has been lost throughout the years. Like I’m some kind of “keeper of the stitches” or something cool like that. Thankfully my mom taught me when I was a young girl and I kept it up, but somewhere along the way, knitting became uncool.  It became something only old ladies did. Who would want to knit their own stuff when they had the ability to buy it? The money to buy it.  Homemade became obsolete. But as a knitter, I feel I’m a part of something much bigger than myself.  I’m part of group of elite people who can take two sticks, a ball of fiber and make something of it.  This race is rarely selfish.  We are excited to share patterns, stories and tips.  We will stop our own project to help you with yours.  We will knit squares and hats and mittens and anything else that is needed for charity.  Need a hat? No problem!  Let me whip that up for you!

The call to needles in the face of war has always captured my attention.  When I functioned as curator of my local historical society, I did an exhibit showing local knitters and the war effort.  I’ve been blessed to receive all my grandmother’s knitting patterns, many dating back to the 1930s when everything was made on tiny needles with tiny yarn (ugh).  They are grand to look at, but I wonder at the patience it must have taken to construct a dress from size 1 needles and fingering weight yarn.  In our age of cheap clothing and instant gratification, I am in awe of the perseverance it must have taken.  You must have really, really wanted something if you spent hours, weeks (if not more) creating that perfect piece. Then again, you had one or two nice sweaters, not twenty, and they lasted years.  The time of overabundance hadn’t happened yet.  Think of all the socks in your drawer and then try to image being a soldier in the Civil War, WWI or WWII who would have done anything for two pair. Two.

What was the culture of wartime knitting?  Were knitters called upon because they were already a generous, hardworking culture, or did they become that way because of the demands placed upon them?  Why isn’t it passed on from generation to generation like it used to be? Did knitting die off because of the convenience of ready-made items, or because people were sick and tired of doing it and needed a break?   It seemed to drop off right after the war efforts ended.  Is that a coincidence?  These are just a few of the questions that keep me up at night.  Yeah, I need a life.

As research is my other favorite hobby, I’ll be diving into wartime knitting culture over the next few months to try and stitch it all together in my mind (hah).  Because I, for one, cannot look at an old picture and wonder, “who made that scarf, and what pattern did they use?”   Stay along if you wish and you might find out something cool.  Or you can skip over these blogs.  Completely your choice 🙂